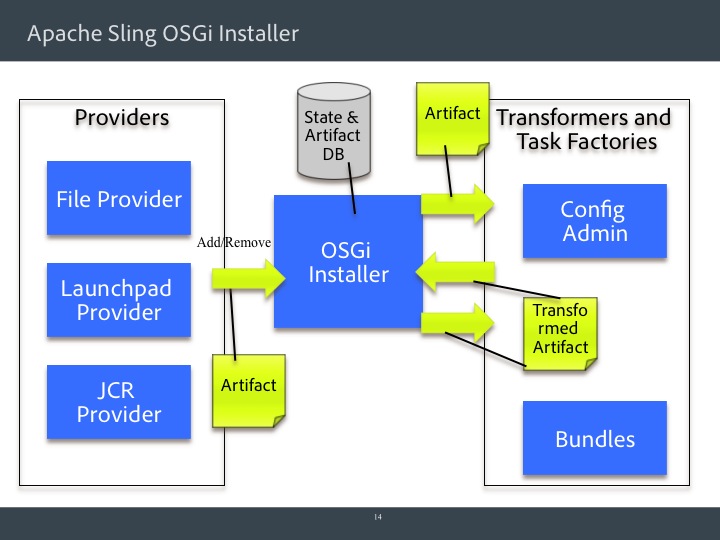 A provider is just scanning for artifacts and their removal. It informs the OSGi installer about new artifacts and removed artifacts. The provider itself has usually no knowledge about the contents of an artifact. It does not know about bundles, configurations etc.

As the OSGi installer itself is not performing the actual install, update or removal of an artifact, its possible to install transformers and installer factories. A transformer inspects the artifacts and tries to detect its type. By default, detecting of bundles and configurations is supported. The final service is an installer factory creating the actual task, like install this bundle, update that bundle etc.

It's possible to add own providers, transformers and installer factories to support custom scenarios.

The installer integration tests module can be useful to understand the details of how the installer works.

Once an artifact is detected by a transformer, it gets a unique id. By default a bundle gets the symbolic name as the unique identifier and a configuration the PID. In addition to this id, an artifact gets a priority information from the provider. The priority is used if an artifact with the same id is provided several times from different locations. For example if a file system provider is scanning two directories and an artifact with the same id (like a configuration) is added to both directories, one should have precedence over the other. This is handled by the priority.

Artifacts with the same unique id are grouped and then sorted by priority and maybe other artifact dependent metadata like the bundle version. Only the first artifact in this sorted group is tried to be applied!

If a failure occurs during bundle installation or update, the OSGi installer will retry this as soon as another bundle has been installed. The common use case is an application installation with several bundles where one bundle depends on another. As they are installed in arbitrary order, this mechanism ensures that in the end all bundles are properly wired and installed.

When all artifacts have been processed (either install, update or delete), a package refresh is automatically called.

For now this feature is considered experimental, see SLING-9172 and related tickets for details.

When this option is active, the entity ID of each installable bundle also contains the version, enabling multiple versions of the same bundle to be installed.

In this case, changes to the installable candidates only affect the very same version of this bundle, leading to the following behavior:

This feature allows for providing multiple versions of the same Java packages, which was previously only possible by creating bundles with different symbolic names but providing the same packages, or by using other installation mechanisms.

The OSGi installer asumes that a symbolic name and version (not a snapshot version) uniquely identifies a bundle. Obviously this is a common development requirement that a released version of an artifact never changes over time. Therefore, once a bundle with a specific version is installed, it will not be reinstalled if the corresponding artifact changes. For example, if bundle A with version 1.0 is put into the JCR repository, it gets installed. If now this jar in the repository is overwritten either with the same contents or with a different one, and this new artifact has again A as the symbolic name and version set to 1.0, nothing will happen as this exact bundle is already installed.

During development, SNAPSHOT versions should be used, like 1.0.0-SNAPSHOT (using the Maven convention). If a bundle with a snapshot version is changed, it gets updated by the OSGI installer.

When an update of bundles is performed through the installer, by default the installer stays in the current start level and updates the bundles. However, if bundles at low start levels are affected, this might result in a lot of churn going on. Therefore, the OSGi installer can be configured to use a more intelligent start level handling:

An installer factory provides support for a specific artifact type, like a configuration or a deployment package etc.

A provider provides artifacts, e.g. by scanning a directory or a database etc.

These tabs are provided through Felix Web Console plugins provided by the dedicated bundle org.apache.sling.installer.console.

The OSGi installer provides a Sling Health Check which validates that the processed OSGi installer resources have the correct state (SLING-5888). By default it will only check resources with a URL prefix jcrinstall:/apps/, so only the resources being provided through the JCR Installer Provider initially located below the repository resource /apps/ are considered.

The health check will fail in the following cases:

The checked bundle was not installed because it has been installed in a newer version from some other location (might even be through some other provider). For further details please look at the OSGi Installer console at /system/console/osgi-installer and check for all bundles with the given symbolic name (=OSGi installer's resource id) and their according URLs.

The checked configuration was not installed because it is already installed from some other location (which has a higher priority). In this case you can see from where it has been installed by looking at the OSGi Installer console at /system/console/osgi-installer and check all configurations with the given PID and their according URLs.

Due to SLING-7735, there might be false positives being reported by the health check, in case the configuration has already been deployed with exactly the same values in the system previously. In that case the OSGi Installer might also mark the resource as IGNORED. If you run into such an issue, you can fix it by removing the manually overwritten configurations: Just go to /system/console/configMgr and delete the according configuration. That way the OSGi installer should automatically create a new configuration for the same PID based on the configuration provided by some provider with the highest prio.

Limitations of the health check